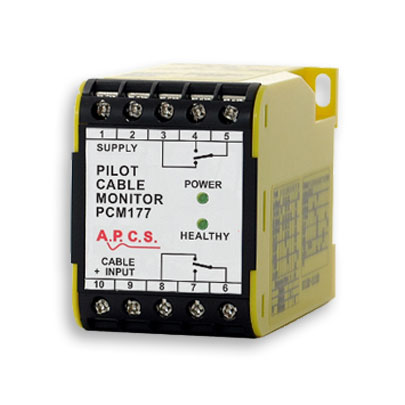 The PCM177 pilot cable monitor is an earth continuity relay. It provides earth continuity protection in accordance with AS/NZS 2081 ensuring the earth connection through a trailing/reeling cable is maintained. A pilot cable is connected to earth via a diode, the PCM177 detects open and short circuits between the pilot and earth conductors of the trailing cables. The unit has filtering to remove unwanted inductively or capacitive coupled ac signals. The LEDs indicate power to the unit and the status of the pilot cable (‘HEALTHY’ LED). There are two changeover contacts rated at 8A/250V which are fail-safe. Output contacts de-energise (unHEALTHY) on conditions of: